With snow fall comes the holiday season in Telluride and around the world. You can like the celebrations. You can lump them all into one Scroogey ball. The only thing you cannot do is ignore them. The first event of the trifecta is Thanksgiving followed by Christmas and New Year’s Eve. When did Thanksgiving, this year Thursday, November 28, become a day of national revelry? We found the scoop in the National Archives. 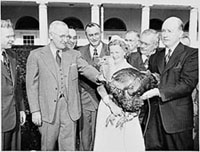 Photograph of President Truman receiving a Thanksgiving turkey from members of the Poultry and Egg National Board and other representatives of the turkey industry, outside the White House., 11/16/1949
Harry S. Truman Library
[National Archives Identifier 200138]

“Thanksgiving, like Ambassadors,
Cabinet officers and others
Smeared with political ointment,
Depends for its existence on
Presidential appointment.”
–Ogden Nash

Washington, DC…On October 3, 1789, President George Washington issued a proclamation naming Thursday, November 26, 1789 as an official holiday of “sincere and humble thanks.” The nation then celebrated its first Thanksgiving under its new Constitution. On October 3, 1863, President Lincoln made the traditional Thanksgiving celebration a nationwide holiday to be commemorated each year on the fourth Thursday of November. In the midst of a bloody Civil War, President Lincoln issued a Presidential Proclamation in which he enumerated the blessings of the American people and called upon his countrymen to “set apart and observe the last Thursday of November next, as a day of “Thanksgiving.”

In 1939 President Franklin D. Roosevelt moved the holiday to the third Thursday of November to lengthen the Christmas shopping season and boost the economy still recovering from the Depression. This move, which set off a national debate, was reversed in 1941 when Congress passed and President Roosevelt approved a joint house resolution establishing, by law, the fourth Thursday in November as Thanksgiving Day.