The Telluride Film Festival Cinematheque at the Wilkinson Public Library presents “The Trailblazing Women of Documentary Film.” On Monday, December 30, 6 p.m., the program features THE KINGMAKER. Writer/director Lauren Greenfield appears in-person to introduce her doc and participate in Q & A session following the screening. Pre-SHOW reception at Telluride Arts (across the street from the library) at 5 p.m.

Scroll down to watch the trailer. 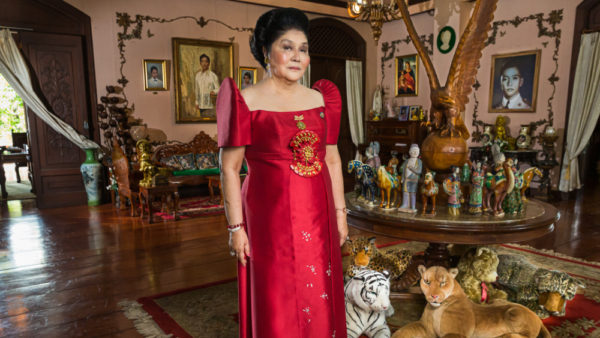 “There is an island of dying animals in the Philippines named Calauit that exists in its current state because of the unchecked opulence of Imelda Marcos. She wanted animals in the Philippines who weren’t native to the country, and officials were bribed to make that happen. It is a perfect symbol for her insidious, egocentric, blinding greed in that it is the kind of landscape-changing thing people with power and wealth do without considering the consequences,” wrote RogerEbert.com, “Director Lauren Greenfield, our best filmmaker when it comes to documenting the extremely rich in movies like ‘Generation Wealth’ and ‘The Queen of Versailles,’ returns to this island a few times in her excellent ‘The Kingmaker,’ recognizing how its almost haunted nature symbolizes the ghosts of the past of her subject, Marcos herself.”

The Telluride Film Festival and the Wilkinson Public Library team up again for a final, very special edition of “The Trailblazing Women of Documentary Film” to join female documentarians who take us around the world weaving diverse, nail-biting and eye-opening stories. Last spring, Shannon Service came to Telluride with her critically-acclaimed film, “Ghost Fleet.” The series is now thrilled to host filmmaker Lauren Greenfield and her new film “The Kingmaker” this holiday season.

Premiering this summer at the 46th Telluride Film Festival, “The Kingmaker” returns for a special one-night-only presentation on December 30. The evening is free to all, and all audience members are invited to attend a pre-SHOW reception at Telluride Arts (across the street from the library) at 5p.m.

“Greenfield, a prolific filmmaker and photographer, has spent her career documenting the upper reaches of the One Percent. She turns her camera on Imelda Marcos, the former First Lady of the Philippines, probable embezzler of billions of dollars, and possible architect of political assassinations,” wrote David Wilson in the 2019 TFF Program Guide, “Photographed within her gilded surroundings, Marcos appears free of guilt, fashioning herself as a humanitarian savior who distributes money to the children who throng to her as she moves regally through her domain. But the film patiently reveals the disturbing political machinations that swirl around her. This is journalism in perfect sync with artistic craft, with Greenfield as the ideal storyteller to chase the cyclone of the Marcos family.”

Greenfield’s photographs have been widely published and exhibited in many museum collections including the Art Institute of Chicago; Los Angeles County Museum of Art (LACMA); the J. Paul Getty Museum; the San Francisco Museum of Modern Art (SFMOMA); and the Smithsonian National Museum of American History, among many others.