Fifty Shades of Gay? Everyone is invited to join in the fun at the 18th annual Telluride Gay Ski Week, February 22 – February 29, hosted by the Telluride Ski Resort –  in fact, one of the event hubs is Telski’s Gorrono  – and organizer/director Rosie Cusack. For more information and to purchase tickets or book special offers go to telluridegayski.com. 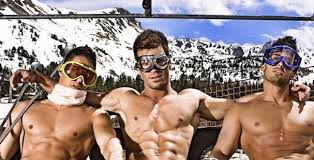 Fifty years before Stonewall (1969), Harlem’s famous drag balls were part of a flourishing, highly visible LGBTQ nightlife and culture that would be integrated into mainstream American life in a way that became unthinkable in later decades.

“In the late 19th century, there was an increasingly visible presence of gender-non-conforming men who were engaged in sexual relationships with other men in major American cities,” said Chad Heap, a professor of American Studies at George Washington University and the author of “Slumming: Sexual and Racial Encounters in American Nightlife, 1885-1940,” quoted in an article on history.com.

By the 1920s, gay men had established a presence in Harlem and the bohemian mecca of Greenwich Village (as well as the seedier environs of Times Square), and the city’s first lesbian enclaves had appeared in Harlem and the Village. Each gay enclave, wrote George Chauncey in his book “Gay New York: Gender, Urban Culture, and the Making of the Gay Male World, 1890-1940,” apparently had a different class and ethnic character, cultural style, and public reputation.

That was then, but still today, the legal status of LGBTQ rights remains murky.

“…Americans don’t agree on whether LGBTQ discrimination actually happens. Conservative advocates argue that LGBTQ people face little to no discrimination, and that their identities have been normalized—LGBTQ folks are featured on TV shows and in movies, and many businesses have voluntarily crafted their own nondiscrimination policies. Ask LGBTQ people themselves, however, and they consistently see discrimination in their daily lives: A recent study from the Williams Institute at UCLA found that lesbian, gay, and bisexual people reported much higher rates of being bullied, fired, or denied a job, promotion, or lease compared with heterosexual people. In a 2015 survey of transgender Americans, 30 percent of respondents with jobs reported experiencing workplace discrimination of some kind within the prior year; a quarter said they encountered some form of housing discrimination…,” wrote The Atlantic.

Then again, a recent New York Times article touted the fact that gay marriages are happier than straight ones: “Same-sex spouses feel more satisfied with their partners than heterosexual ones.”

Yes, “Out” is trending big time these days.

That is a many fluid thing. On Facebook alone, there are well over 50 sexual identity options – and counting.

Baby, the movement has come a long way.

How far? Let’s skip hand in hand down memory lane all the way to Telluride’s front door, where the 18th Annual Telluride Gay Ski Week, Saturday, February 22 – Saturday, February 29 – brings a fun-filled week to our mountain haven, all events, morning through night, hosted by the Telluride Ski Resort –  in fact, one of the event hubs is Telski’s Gorrono  – and organizer/director Rosie Cusack. 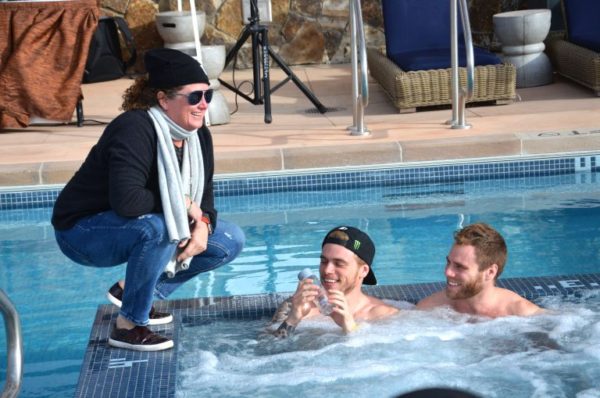 Founded in 2002 and under the leadership of Cusack since 2016, Telluride Gay Ski Week, a winter highlight, is a cheerful, cherry, merry, jolly, lighthearted, high-spirited, (etcetera) event. Specifically, guests (and locals too) get to enjoy skier/boarder meet-ups, après happenings, drag bingo, a Mardi Gras celebration, The White Party, an Off-White Party, a spirits tasting, Telluride Choral Society’s “A Night at the Opera,” Telluride AIDS Benefit Gala Fashion Show, and after-party.

And at the Telluride Gallery of Fine Art, Nelson Parrish created a piece of wall art in support of Gay Ski Week. The piece titled “T-Pride” is comprised of wall panels created from bio-resin, pigment, and reclaimed wood:

“Nelson Parrish’s work is all about the joy of color,” said TGFA director Malarie Reising Clark. “We have been throwing around the idea of doing a collaborative project for quite some time. Celebrating Pride and Gay Ski Week proved to be a source of wonderful inspiration for such a project. This iteration of the Pride Flag by Parrish, titled ‘T-Pride,’ was created in an edition of five and exclusive to Telluride Gallery.” 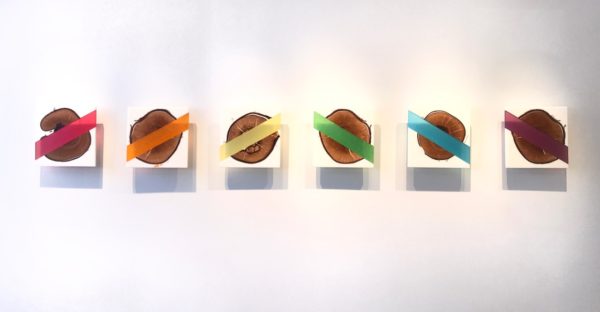 Everyone who is anyone will be OUT and about.

But this is now.

The Way It Was, a slightly more in depth history of the LGBTQ movement in the U.S.: 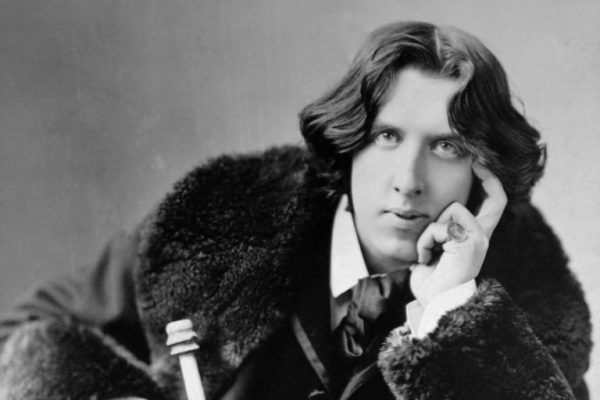 For the LGBT community, it has not always been smooth sailing, errr, skiing. Historically, there have been lots of Volkswagen-sized moguls on the way to après.

Once upon a time, it was all about the “love that dare not speak its name.”

In 1895, on a grey rainy November day in London, one of history’s greatest playwrights and wits, Oscar Wilde (of the famous quote above), was arrested for “gross indecency with men” or sodomy, for which he was convicted and sentenced to two years in prison.

Fast forward to the 20th century – when things still took a long time to improve.

Prior to and throughout most of the 1900s, standard psychology viewed homosexuality in terms of pathological models as a mental illness.That classification began to be tested in research, which never ever produced strong empirical evidence that would define homosexuality as a disorder. Yet, in 1952, the American Psychiatric Association’s diagnostic manual listed homosexuality as a sociopathic personality disturbance. One year later, in 1953, President Dwight D. Eisenhower signed an executive order that banned homosexuals from working for the federal government, saying they would be a security risk.

Then, on a momentous day in June– June 28, 1969 – to be exact, police raided the Stonewall Inn in New York City, triggering protests and demonstrations. The gay civil rights movement in the United States had officially begun.

Since then, the world has become a much better place for the LGBTI community. Dignity and equality have become part of life’s regular hum.

Fast forward to June, 2013. The United States Supreme Court issued a critical decision declaring the part of the 1996 “Defense of Marriage Act” denying same-sex married couples federal marriage benefits unconstitutional, a landmark decision, which immediately opened the door to over 1000 marriage benefits that married same-sex couples could now enjoy in full equality with their heterosexual counterparts.

By 2015, the U.S. Supreme Court ruled, 5–4, in Obergefell v. Hodges that same-sex couples have the fundamental right to marry and that states cannot say that marriage is reserved for heterosexual couples.

“Under the Constitution, same-sex couples seek in marriage the same legal treatment as opposite-sex couples, and it would disparage their choices and diminish their personhood to deny them this right,” Justice Anthony Kennedy wrote in the majority opinion.

Also in 2015, even The Boy Scouts of America (BSA) ended its ban on gay adult leaders.

Unlike in Wilde’s time, today openly gay writers, actors, and musicians, and artists of all stripes and persuasions, are prominently featured in popular art and entertainment venues and no one, well nearly no one, raises an eyebrow.

More and more, gay celebrities and celebrity hopefuls are proudly coming out of the closet much earlier in, or even at the very start of their careers, proudly waving their Judy Garland flags on high. 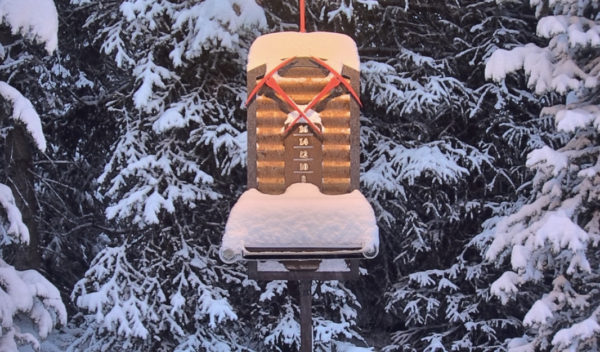 The Telluride Ski Resort offers a genuine mountain experience with quality terrain for all levels. With 148 trails, 2,000+ skiable acres and a 4,425-foot vertical drop, our host town truly has it all. Add to that, breathtaking scenery and a charismatic, historic mining town populated by charming locals, known to welcome everyone with open arms.

“Telluride might be known for its famous landowners—Oprah Winfrey and Ralph Lauren among them—but this majestic ski town tucked away in a box canyon in southwestern Colorado still maintains its Old West charm. Once a mining town, and where Butch Cassidy started his bank-robbing career back in the 1890s, modern-day Telluride remains the unfussy, more casual ski-town sibling of places like Aspen or Vail. Don’t let the lack of fur coats and big-name chefs fool you—Telluride has world-class dining and lodging to match the outstanding ski terrain at Telluride Ski Resort…,” wrote Vogue. 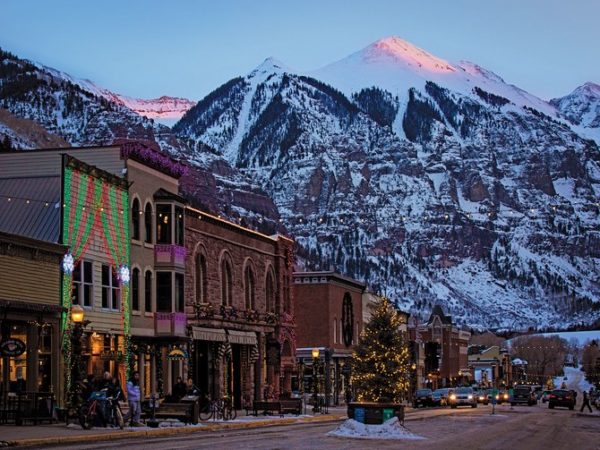 “Just because Telluride is about understated glamour, however, doesn’t mean it lacks a strong culinary scene, high-end shops, or luxury accommodations. This small town needs to cater to the most discerning of tastes and it does not disappoint on that front. You’ll find impressive local microbrews, wine lists with some of the world’s best bottles, multi-course tasting menus served at the top of the mountain…, “ wrote W Magazine.

But also because of TGSW’s carefully orchestrated schedule of entertainment, which ups the fun. All that and the actual ripping and shredding too. 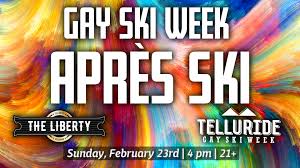 “We are really excited about this year,” said Cusack. “Once again, we are going to have an amazing week here in this beautiful community. It is incredibly important to me that we support Telluride Gay Ski Week and in so doing, welcome diversity here at home – and in the entire country.”