Go here to check out a major story about Slate Gray and Telluride Arts in Telluride Properties’ Truly Telluride Magazine. 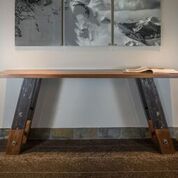 Paul Russell and his “Geneva”: 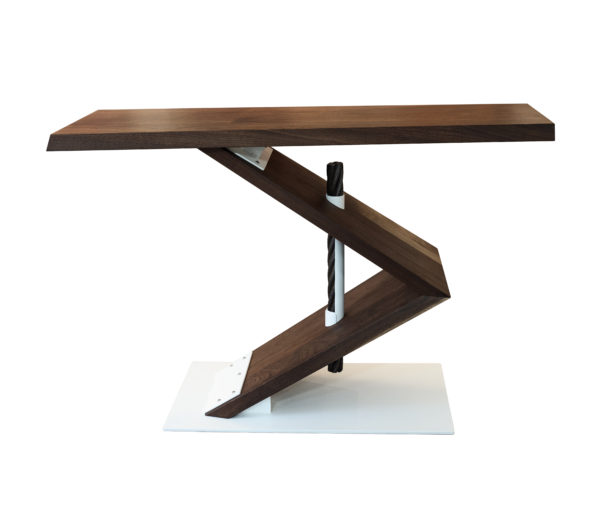 The quote is attributed to American inventor Thomas Edison (for geeks, from the Ladies Home Journal, 1898).

Just ask furniture-maker Paul Russell, a fixture now in the stable of the Slate Gray Gallery. His upcoming show, opening with Telluride Art’s June Art Walk, is titled “Perseverance.” Which is nothing more (and nothing less) than a variation on the theme of Edison’s insight.

The centerpiece of Russell’s show is a piece titled “Geneva.”

The inspiration for that console-sized table dates back two years. (Story below.) But creating this piece of furniture art took Russell one full year of trial-and-error, blood, sweat and tears, to make.

It has to do with the engineering, including the fact that table saws –asRussell explained – tilt to a max of about 45 degrees – and to create the stunning “V” that anchors bottom to top required 65 degrees. Then there was the problem of attaching his signature cable detail, which intersects the “V” through two perfectly aligned holes. How Russell pulled off that sleight-of-hand got lost in translation. Let’s just say “It’s complicated.”

“Geneva” is Russell’s first fully green table. (Not color, ecologically speaking). He fashioned it from white powdered-coated steel, a vertical piece of cable (thank you Telski) and walnut, then finished the piece with linseed oil, an important detail.

In Europe, linseed oil is widely used to finish hard-wood floors. Unlike most commercial grade finishes, however, linseed does not emit (or off-gas to the trade) toxic chemicals. A person could eat off linseed-topped floors – or off Russell’s table. (But don’t. Plates remain a better choice.)

Linseed oil is also heat-resistant, which means when you are on your cell phone in deep conversation and, forgetting yourself, put down your mug of hot coffee, you won’t have ruined your brand new, not inexpensive, piece of furniture.

Linseed is also very durable. (Though if you smash “Geneva” with a hammer in a fit of pique, she will dent.) 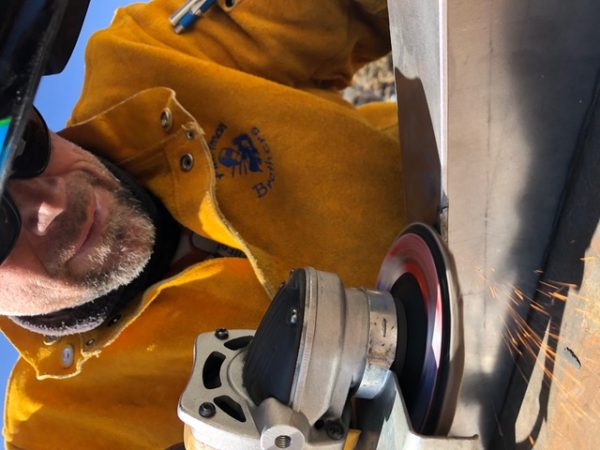 Geraldo de Barros (1923 – 1998), was a painter, photographer and designer and one of the most influential Brazilian artists of the 20th century. He was also active as a furniture designer from the mid ’50’s until the end of the ’80’s.

The peripatetic Paul Russell (of Aspekt Design) first encountered de Barros’ furniture on one of his many trips to Europe to ski and explore. A gallery in – wait for it – Switzerland’s capital of Geneva was showing his work.

Russell was particularly struck by a table de Barros crafted from walnut and steel painted white. He originally paid tribute to the South American with a piece he created in 2019 for Telluride Arts’ Art & Architecture weekend.

Ski lift cables and chains are a thing in Russell’s work, a legacy of his background growing up in the mountains of Telluride, where he became an extreme skier. (In his 20’s, Russell skied professionally.) 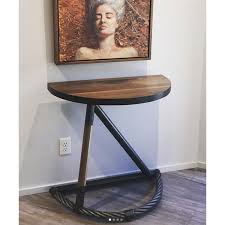 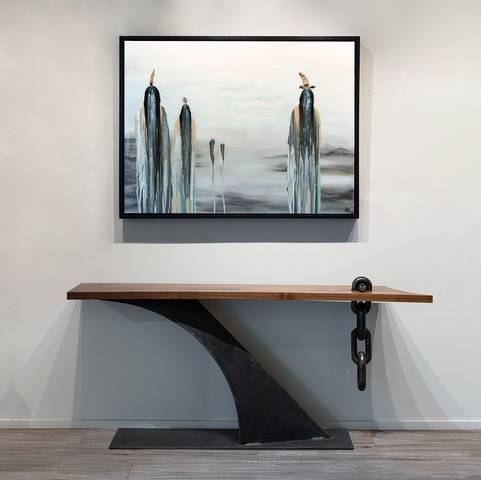 A second Russell piece designed for that same Art & Architecture show, “The Plank,” featured a piece of chain from the old Durango railroad.

“The consistent threads through my life are a love of the mountains, a passion for skiing, an appreciation of ski town life, and a love of travel. All of that feeds into my work.”

(And again, “Geneva,” the town, tends to be base camp for Russell’s annual ski tours.) 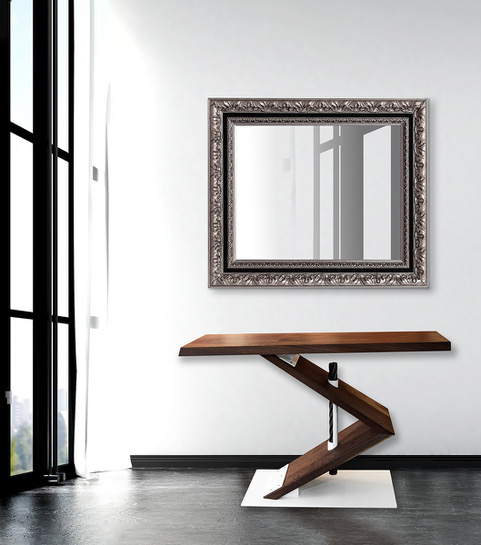 Before becoming a professional artist, Paul Russell worked for seven years as Mr. Fixit  on a local ranch, where he also gave ATV and snowmobile tours. He left that job to open a motorcycle shop with his wife Susie Schaefer-Russell, which the couple ran for 10 years.

Today Schaefer-Russell is working at Lumiere, a charming boutique hotel/residence in Telluride Mountain Village, where she is a partner-owner. The hotel’s new look pays tribute to Telluride’s mining days and showcases a number original Russells, pieces crafted, natch, from white oak and walnut for the durability of those woods and topped off with mountain memorabilia, a cable or chain, the artist’’s signature.