Thursday, September 3, 2020, marks the 4th Telluride Arts’ Art Walk of the season. Throughout the month, Slate Gray Gallery Telluride is featuring the work of Joseph Toney in a show titled “Carbones.” His illustrative abstractions of majestic mountains reduce his lofty subjects to clean lines and muscular patterns. Please scroll down for more on the artist.

Go here for an overview of all participating Art Walk galleries. 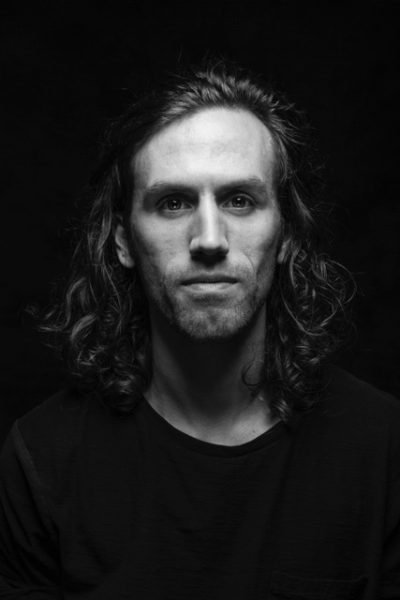 Artist Joseph Toney was discovered by Telluride Arts, who introduced him to Slate Gray Gallery.

Avid mushroom hunters all tell you that fire twins with delectable, wily morel mushrooms. After a large wildfire, these fungi, distinguished by their dark, honeycomb-like caps, pop out of the ground by the bushel in Spring.

Morel bonanzas, the stuff of legend among mycophiles.

And, when fire rages through dry underbrush, it clears thick growth so sunlight can reach the forest floor and encourage the growth of native species. Fire frees these plants from the competition delivered by invasive weeds and eliminates diseases or droves of insects that may have been causing damage to old growth. Wildflowers begin to bloom abundantly. 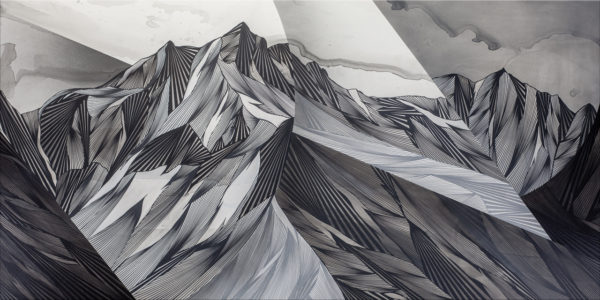 And in the rare case of artist Joseph Toney, the aftermath of major conflagrations yielded a new technique, which enhances his simply elegant, minimalist mountainscapes, the artist’s marks serving as metaphors for humankind’s marks on the pristine wilderness environments he celebrates.

“Once the snow started to melt here in Utah, I began harvesting charcoal from forest fires from the previous season in the nearby Uinta Mountain range,” Toney explained. “I was not entirely certain where I would go with this new material, so I experimented.

Ultimately Toney began using the found carbon as one of the layers in his intricate painting process.

“I would create loose sketches and light studies using the charcoal directly on the canvas as background for acrylic washes and line work. The attributes of the found charcoal varied pretty drastically from what is available in art supply stores. This found carbon enabled me to achieve fantastic translucent qualities with warm grey undertones. In doing so, I reduced part of my practice back to one of the first tools used by humans for mark-making. Before we humans began to destroy our surroundings with marks.”

Joseph Toney’s last show at Telluride’s Slate Gray Gallery took place in June 2019. At the time he was headed to Westminster Colorado, just outside of Denver, to paint a 2,500-foot mural for the city. Upon completion, the artist hit the road on a long van trip through the Rocky Mountain West through Idaho, Montana, British Columbia, and Alberta. The trip, a mental reset, spawned new creative ideas.

“I rounded out the year with a mural project in New York City and another in Utah. And, over the winter, I started focusing on those new themes. I began contemplating the role humans have played in altering our natural landscape and how that correlates with my creative process. For me, the corona pandemic helped foster a renewed focus in my studio practice. I thrived in the isolation. And I was lucky to only lose only one or two projects. In contrast, I largely benefitted from the new experimentations with found carbon that happened during the first few weeks of the pandemic.” 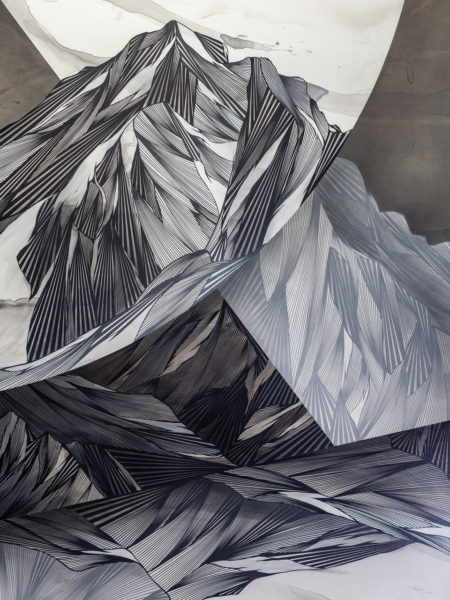 In Joseph Toney’s illustrative abstractions, majestic mountains are reduced to clean lines and testosterone-infused patterns. These contour studies summarize the richness and variety of the awesome shapes the artist has loved since his childhood growing up in Appalachia spitting distance from a ski mountain.

Like many of Picasso’s (a major influence) work in this genre, Toney’s images are “memory landscapes,” in other words, they are not painted plein air style on site.

Toney’s creative process begins when he is out ski touring, biking, or hiking, camera in tow. Photograph in hand, he initially executes his painting with freehand sketches, then finishes the work using a process he sums up as “device drawing,” a technique that involves the use of rulers, French curves, and a makeshift compass. The resulting works executed in acrylic and resin and now charcoal, are directly translated onto wood panels.

The Chinese term for “landscape” is comprised of two characters which translate to “mountains and water.” The age-old tradition is linked with the philosophy of Taoism, which emphasizes harmony between man and the natural world.

Cubist paintings, landscapes or otherwise, broke with the academic convention of a single viewpoint. It is as if the artists kept shifting positions and then attempted to combine the different “views” they saw onto a surface. The resulting image is a complex interlocking and overlapping of forms. The subject is transformed into a kind of geometry – or architecture – often rectilinear in its makeup.

East meets West, past meets present, in the edgy, increasingly abstract landscapes of Joseph Toney, who cites both Chinese scroll art and Cubism as key influences. His “Carbones” is now on display through September at Slate Gray Telluride. 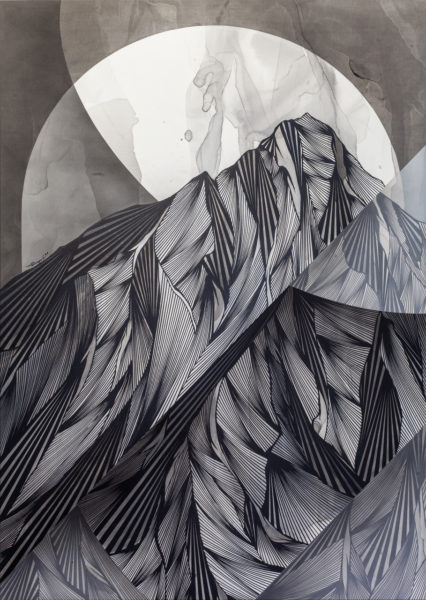 The artist Caspar David Friedrich once said “The artist’s feeling is his law.” Toney’s feeling?: unbridled enthusiasm – especially when in the mountains skiing or just being. Like his Chinese counterparts, the young artist has always been in harmony with the natural world and hopes those feelings pervade his work:

“My goal is for my art to communicate the sense of completeness, liveliness, and excitement I feel when I spend time in the mountains.” 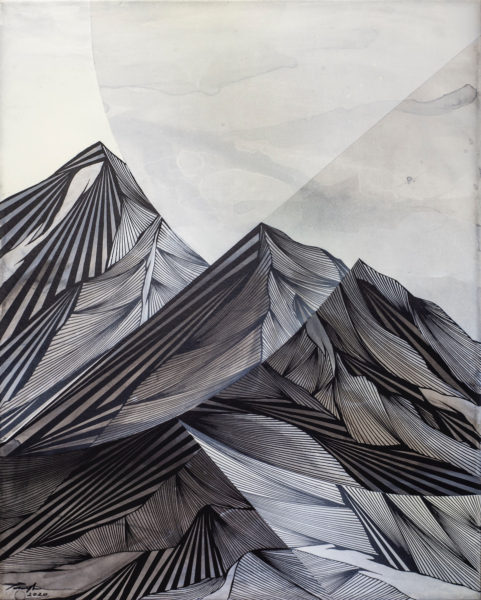 Joseph Toney, age 29, grew up in Boone, North Carolina, just 10 minutes from a ski mountain, where he became a self-described “fanatic.”

He began making art in high school and knew way back then his destiny was mark-making. Toney went on to attend a local college, Appalachian State, majoring in the School of Fine Arts in graphic design and painting.

Toney took a hall pass following his sophomore year to spend time in Austria and Germany studying design in Dornbirn, a toy town on the border. Back home, he landed a job with Teton Gravity Research, working his magic on everything from T-shirt design to logos, posters, even magazine ads.

He then returned to college to finish his degree, after which he landed a job with Armada Skis:

“Why Armada? The company had an 800-square-foot studio, which was my playground. I could work and paint.”

Toney left that job in December 2018 to see if he could make it on his own.

And to date the artist is rocketing.

The arc of Toney’s career should be an inspiration for all young artists.

In addition to freelancing now for Armada Skis and other clients, Toney took the initiative to put together several grants, which have paid off big time.

And for him, pandemic or no, the beat goes on…