In life, change is the only constant. But when that change is the loss of a beloved leader like Bill Jensen – in the midst of a pandemic no less – the Telluride community is left reeling. Jensen stepped down as Telski’s CEO on Friday, August 7. 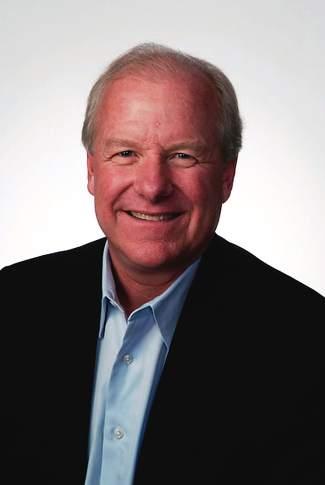 In May 2020 San Miguel County Manager Mike Bordogna announced the formation of an Economic Recovery Committee Home with representatives from governments, non-profits, private businesses and more. The man chosen to helm the initiative in phase 2 was Telluride Ski & Golf Resort CEO Bill Jensen.

“I have enjoyed being a part of this innovative and thoughtful group of community business leaders, and look forward to collaborating further with the county and taking the committee’s efforts to the next level,” said Jensen back then.

Typical Jensen. Taking things to the next level – with a little help from his (always willing) friends.

Bill Jensen, former CEO of the Telluride Ski & Golf Resort, (per Forbes) the “alpha” in North America, was honored in April 2019 by the U.S. Ski & Snowboard Hall of Fame, inducted into that elite snow industry fraternity as a thought-leader among the eight industry leaders in the Class of 2018, which also included Tom Sims, inventor of the “skiboard”; the late Don Henderson, a pioneer of ski racing; Tom Kelly, the leading spokesperson for U.S. Ski & Snowboard, alongside Bode Miller and Andrew Weibrecht 5-time and 2-time Alpine Skiing Olympians respectively; Kristen Ulmer, known as the first female extreme skier; and Hilary Engisch-Klein a world dominating freestyle skier.

In the 2019 edition of Telluride Properties’ Truly Telluride magazine, we were honored to tell an unabridged version of the story of Jensen’s robust career. For a copy of the longer article head to T-Prop’s HQ, 237 Oak Street, call 970-728-0808, or go here.

Eye-witness account of the evening Bill became one of only 433 individuals from the snow industry to have made that list of inductees since its inception in 1905.

The tribute was and is well-deserved. Fact is no one has led more resorts in more markets more successfully than Bill Jensen, who was Top Dog at Vail Resorts and Intrawest and, over a 45-year career (and counting), applied his velvet (and Midas) touch to an A-list of mountains including Sunday River, Northstar, Breckenridge, Vail, Whistler – and then Telluride. Few have mentored more industry leaders.

On December 6, 2015, Chuck Horning, Majority Owner of Telluride Ski and Golf Resort had this to say about his new hire:

“This is a significant step towards bringing Telluride to its potential. Bill and I have been friends for many years. Having Bill as a partner brings depth to the ownership of this resort, and our shared interest in bringing together community and resort sustainability with a long term vision is the core purpose for our partnership. Telluride is a relatively young resort with a huge potential.”

“I chose to come to Telluride because of the opportunity to invest in the future of this extraordinary resort. For me, joining Telluride Ski & Golf Resort as a partner represents an unprecedented opportunity to fulfill Telluride’s potential as one of the top resorts in the world and the best in North America. To achieve this goal we will appeal to guests who seek out the best through the variety of unique experiences we offer. As part of that commitment, we will honor the special and unique nature of Telluride by infusing sustainability through economic growth and supporting the integration of science, including wellness and longevity for guests and residents. We will hire the best, we will work and grow together, and we will honor the spirit of Telluride.”

Under Jensen’s watch, Telluride was named #1 in North America by USA Today, just one of many high-profile media to sing hosannas to our mountain since his arrival on the scene. The publication gave the destination a PAF (Pure Awesomeness Factor) of 99 (out of 100). 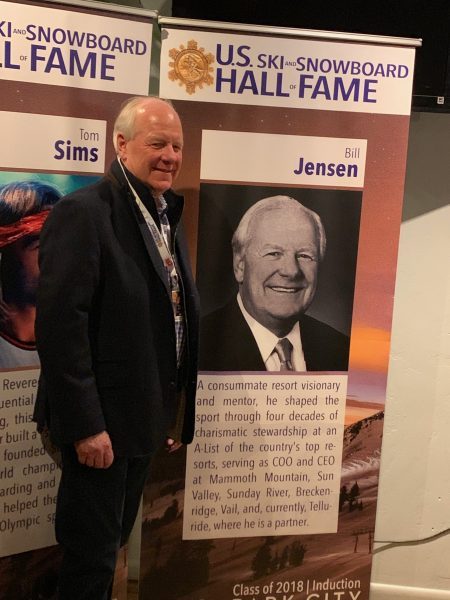 In concert with the 15 million skiers and snowboarders in the U.S., a warm and enthusiastic audience of about 600 snow industry friends and/or professional colleagues – including his”Hotdog” buddies –gathered in the Grand Ballroom of Salt Lake City’s Little America Hotel on April 6 to celebrate the U.S. Ski & Snowboard’s Class of 2018. Dubbed “The Leader,” Bill Jensen was #6 on the program, which introduced each honoree with a short video of his or her life.

On cue, Bill Jensen turned from the screen towards the admiring crowd ready to hang onto his every word and said – wait for it – “What happened to my hair?”

In a New York minute “What happened to my hair” became the latest addition to a long list of catch phrases that have become known as “Billisms,” which includes, for example, his now famous “grocery store test.”

“Realize that every action you take with staff and your community has to pass the ‘grocery store test’ because inevitably in a mountain town, every decision or action you take – good and bad – leads to an interaction at the local supermarket.”

The good news about your hair Bill? Over your long, thick and illustrious career there has clearly been an inverse relationship between hair and success. Think of the dichotomy as a clear-cut variation on the theme of less is more.

When he turned 21, Bill Jensen was not given a shiny new car.

Not even a toy model.

Nothing whatsoever wrapped in a pretty bow.

On the morning of his birthday in October 1973, Bill’s parents gently pushed him out of the nest.

So he flew the coop, landing in Mammoth, on the way to his destiny. There, boss man Bill Cockcroft took him in and gave him his very first job: Bill Jensen became a liftie, the “gateway drug to the snow industry” (per the evening’s MC, U.S. Ski & Snowboard’s Dan Egan).

After only 10 months in Mammoth, Cockcroft put Bill Jensen in charge of training, payroll, scheduling and more. And, over the next three seasons, he also got to ski more than 200 days.

Nice work if you can get it.

Bill Cockcroft was one among the men and women who had traveled great distances to help lift up their friend and colleague: of the 600 people in the room, 150 were there to support our fearless (and peerless) leader.

Hail, hail, the gang’s was all there: 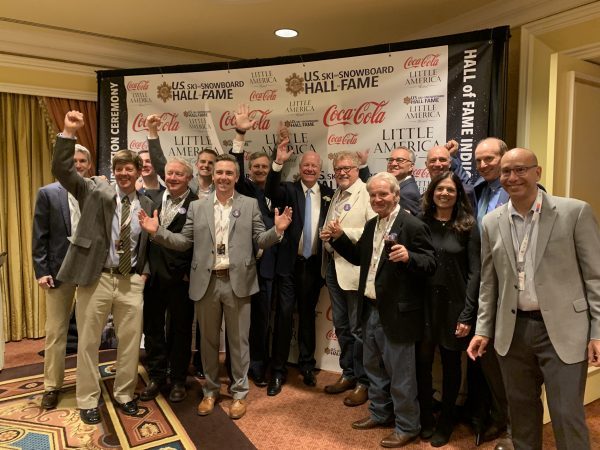 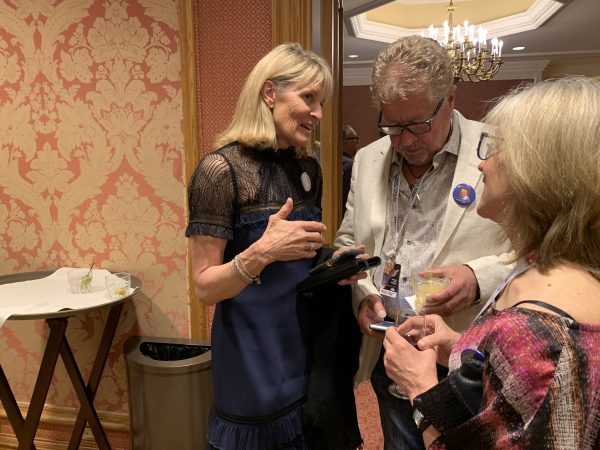 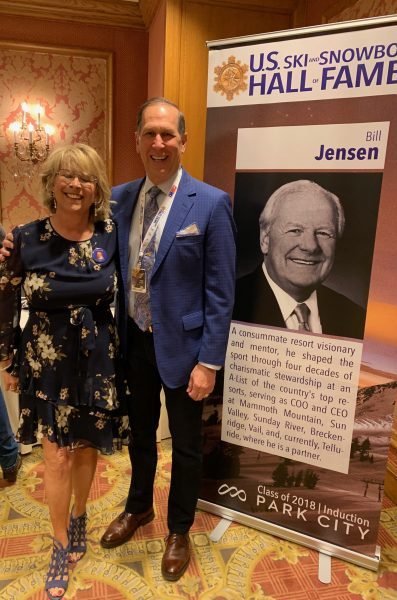 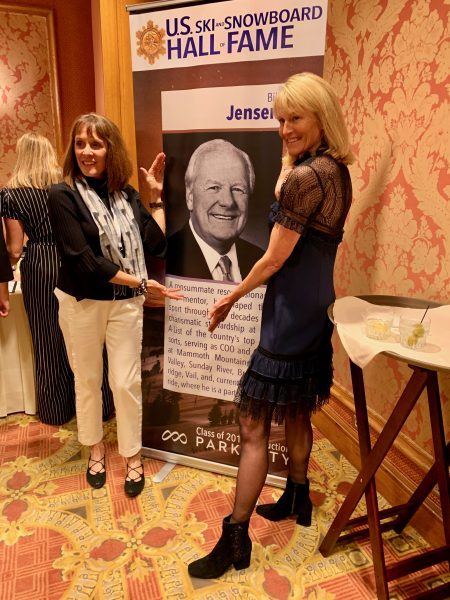 But it was Bill who did all the heavy lifting, deflecting the spotlight onto everyone in his crowd- as he always does. 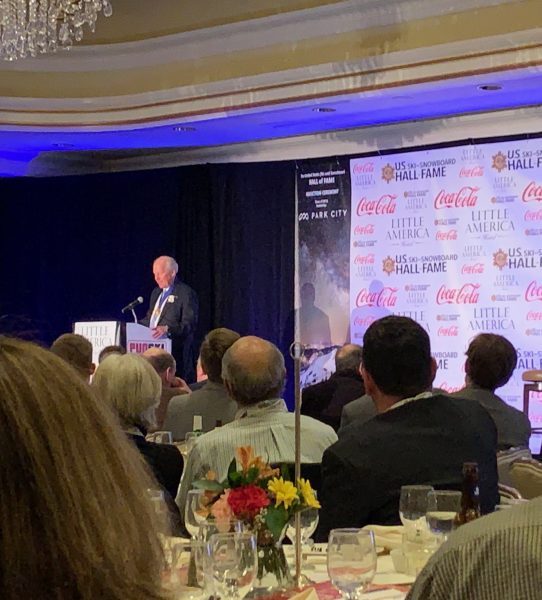 Bill Jensen turns the spotlight onto his friends and supporters, 150 strong.

On to Cockcroft, now SVP and consultant in Mammoth. The man beamed – which was all he could do since he had a really bad cause of laryngitis.

On to Michael Berry, the recently retired president of National Ski Areas Association (NSAA), who gave Bill his second job in the industry in Sun Valley.

On to Jim Donohue, a close friend and business associate of 31 years, who still teaches in Beaver Creek 100+ days a season.

On to Telski’s Chuck Horning, who so wisely appointed Bill Partner & CEO of Telski in 2015. Horning flew all the way up to Salt Lake from Hawaii for the party.

He turned the tables on his cheer-leading squad, the well-represented, wildly enthusiastic Telski crowd, applauding his team, asking everyone to take a bow.

“You are only as good as the people you work with.”

Bill especially refocused his spotlight onto his wife Cheryl, his partner of 25 years who, for past 15 years, has worked tirelessly to enhance the lives of veterans of America’s recent wars.

On his night, Bill declared from the podium to all of his world: “You are my hero.”

Back at you Bill.

The Telluride community mourns your loss.

Check out Clint Viebrock’s video of the celebrations surrounding Bill Jensen’s induction. It takes a village…or just the Jensens’ very large crowd. (Of note: Cheryl & Co. sure know how to shake their tail-feathers.)