Telluride’s Sheridan Arts Foundation (SAF) is hosting the 17th annual Telluride Plein Air Festival on September 18 and 19, 10 am-6 pm, in Elks Park and the Sheridan Opera House courtyard. Participating artists are spending one week prior to the show painting outdoors, en plein air, to capture the light, color, and unique character of the breathtaking Telluride region. 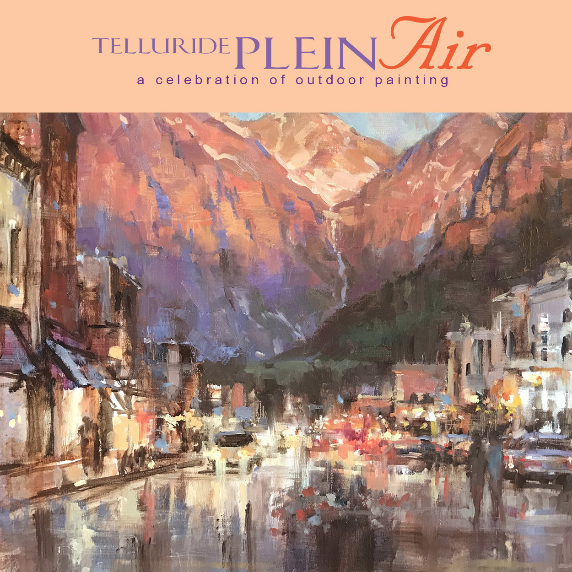 The SAF normally hosts Telluride Plein Air over the Fourth of July weekend, but due to the onset of COVID-19 the event was postponed and sized down. Instead of the usual 25 artists, the SAF is now bringing in 11 nationally renowned plein air painters who will spend five days in and around Telluride capturing the area’s beauty in the open air. This will be the first time the festival has been held as Telluride’s landscape changes into its vibrant fall cloak.

Telluride Plein Air’s participating artists were selected through a juried process in which applicants submitted images and a biography which were then reviewed by a panel of artists, gallery owners and educators.

For the duration of the sale, each artists will follow the CDC guidelines, wearing a mask at all times. Their booths will be at least six feet apart, and the SAF is encouraging the painters to keep their distance from guests and potential customers.

What is Plein Air?

En plein air is a French expression, which means “in the open air.” The term is used to describe the act of painting outdoors, popularized in the 19th century.

The down low on plein air begins with Eugene Boudin, one of the more adventurous 19th-century painters, known primarily for his beach scenes and seascapes of northern France and for his luminous skies. One of Boudin’s students was a young painter named Claude Monet to whom Boudin taught the importance of painting a scene directly from nature in the light, in the air, just as he saw it. In the stroke of Monet’s brush, painting en plein air was born. Out went the dark palette of Realism and the Barbizon School. In came the sun.

When Monet and his colleagues first came on the scene back in 1874, artists who ultimately became brand names – Monet, Manet, Renoir, Bonnard, and Degas – they were all considered rebels. Defying the traditions of the official Salon de Paris, they moved their studios outdoors into the open air – again, en plein air – to facilitate the direct observation of nature.

They originally called themselves “Societe Anonyme,” but a critic hatched what he believed to be a derisive handle based on the title of one of Monet’s paintings in a group show: “Impression: Sunrise.”

The Impressionists chose to use landscapes and scenes from everyday life as covers for their true subjects, color and light, defying a trend popular throughout the 19th century (and with the Salon de Paris) to paint historical or literary subjects.

Impressionism is an old idea.

Artists in the United States were attracted to the spontaneity of the Impressionist artists and the freedom of creating in the Great Outdoors instead of in the confines of a studio. Many traveled to France to study with the Frenchmen. Suddenly, locations blessed with remarkable light became the go-to for painters on both coasts and in American Southwest, where colonies of American Impressionists formed.