Thursday, October 1, 2020, marks the 5th Telluride Arts’ Art Walk of the season. Up now and through off-season the Telluride Gallery of Fine Art is featuring a blockbuster of a group show titled “Local’s Loop.” 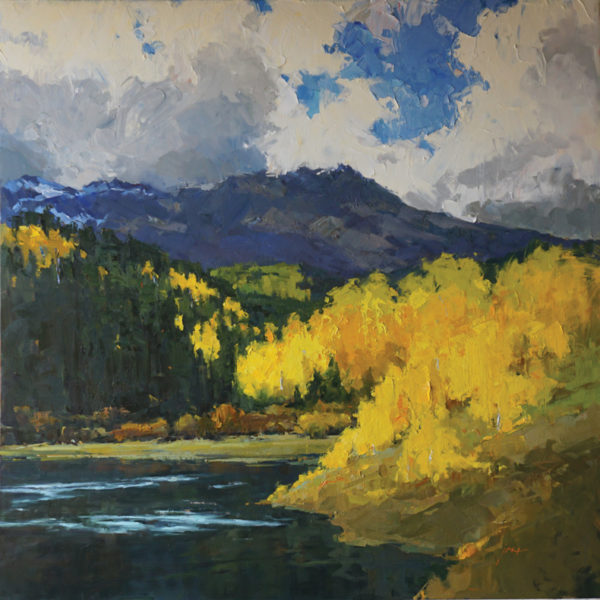 Bruce Gomez, Julee Hutchison and Gordon Brown are artists who share a love of the natural world. They are also three peas in the same pod, namely, the Telluride Gallery of Fine Art, now owned by Ashley Hayward and Michael Goldberg. However, Gomez was the very first artist the gallery’s original owners, the Thompsons, signed for their stable when they opened for business on Main Street (130 East Colorado) back in 1985.

Gomez and Hutchison are similarly inclined, producing easily recognizable, fuzzy-edge, forms that are wonderfully nuanced. Brown is non-objective artist, whose work tends to depict an idealized, abstracted, natural world of lyrical and atmospheric landscapes and seascapes.

The three artists are part of a wide-ranging group locals’ show that also includes Nicole Finger, Carl Marcus, Brett Schreckengost and Brittany Miller. The show opens with Telluride Arts’ Art Walk on Thursday, October 1, 2020 and runs through the off-season. The talent in “Locals Loops” share a common thread: through their work, the realm of the ordinary (a cupcake) and everyday (leaves on a tree) is elevated, almost sanctified. 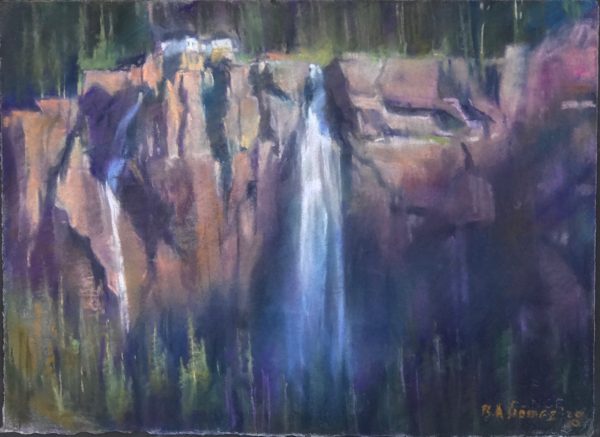 Bruce Gomez is, at first glance, a realist: what you see is generally what you get, signature shimmering surfaces always pleasing to the eye. However, squint and Gomez’s lush, layered pastels become a complex tapestry of abstract passages – parts of the sky, sections of mountains and water – with an Abstract Expressionist feel that, in the end, amount to gorgeous studies of color and light.

Entirely self-taught in the medium, Gomez has worked with pastels for decades. The creative process for the artist begins with a photograph. Next he plots the principle elements of the composition from photograph to paper, which he treats with sandpaper to create his velour surfaces. Gomez’ subject matter comes primarily from his travels throughout the western U.S., France, Italy, and England. He tends to feature Telluride, but also Moab, the Grand Canyon, Wyoming, Paris, Provence, and Tuscany.

Bruce Gomez paints and teaches out of his Denver studio. However, he, like Hutchison, regularly led classes at Telluride’s Ah Haa School for the Arts – in pre-Covid days. 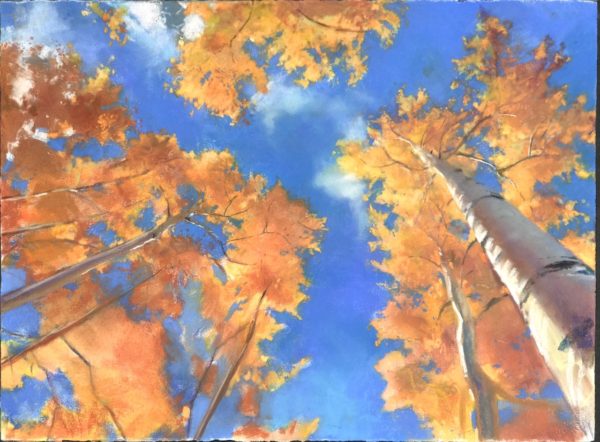 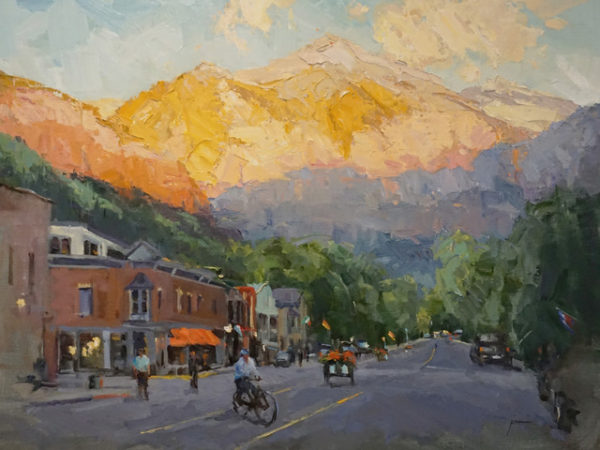 Hutchison, In the Shadows of Giants

For Julee Hutchison, the outdoors is a place of spiritual revery. Her paintings, however, do not tremble and quake with religiosity, rather, they speak volumes about the complex nature of art about Nature in a very quiet, but very direct way: some images are playful; others, more introspective.

Hudson River master George Inness famously said, “You must suggest to me reality. You can never show me reality.”

Hutchinson’s impressionistic landscapes are postcards from the interior, reflecting not a landscape per se, but her attitude towards a particular place. The artist’s gift lies in an unerring ability to mold her passion for her surroundings into a reflection of private feelings and sensations, at their best – and her new images qualify – a synthesis of direct observation, memory and fantasy, with a growing impulse towards abstraction.

The Telluride Gallery has shown Hutchison’s work for over 16 years. She is an annual finalist in the Plein Air Salon Competition and named “Artist to Collect” by Southwest Art Magazine. 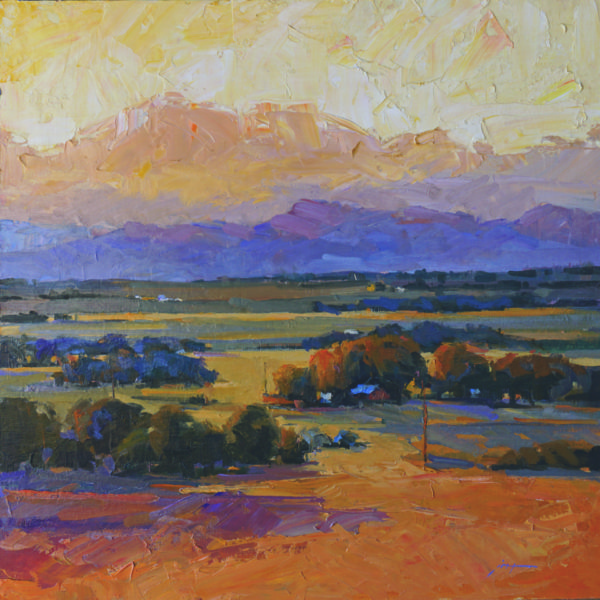 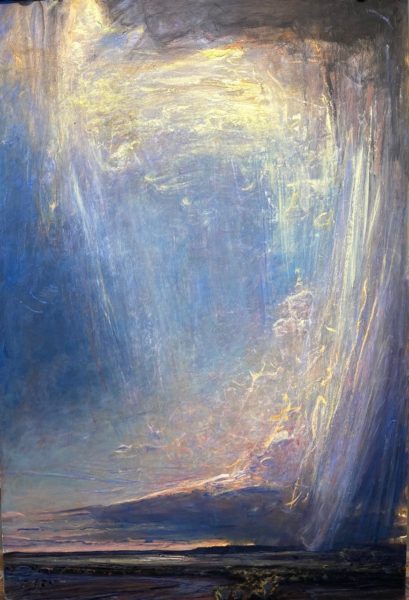 “My paintings are all about light and mood,” Colorado native Gordon Brown once explained to Telluride Inside… and Out.

The man never tires of the view from his converted barn/studio in Ridgway, a place that allows him to observe firsthand the various moods and palettes of the changing seasons.

From his earliest years, Brown was rarely found without pencil or paintbrush. Weekend backpacking trips into the Colorado canyons were part of his ritual. The following days would find him assembling his newly found Ute arrowhead collection or painting Indians and their campgrounds.

Teachers and artists strongly encouraged Brown to pursue his artistic talent, not fully realized  though until years later when the artist became mesmerized by the work of Chinese painter Shang Ding, who became his tutor and mentor. In true historical tradition, Brown apprenticed under Professor Ding of the Beijing Central Art Academy, accompanying him as they made their way through the landscape, emulating his every brush stroke in a plein air (painting outdoors, not in a studio) style.

Over the years, Brown continues to show his appreciation for the subtleties and drama created by changing light, the through-line of his work, examples of which can be found in the permanent collection of the Denver Art Museum and the Forbes Collection to name just two of the many institutions which have acquired his paintings.

Gordon Brown has been represented by the Telluride Gallery for over 18 years.

Add it all up and the work of Gomez, Hutchison and Brown becomes a tour de force of preternatural color and persistent light, subtle brushstrokes providing an internal architecture while yielding to dazzling color and beguiling composition. 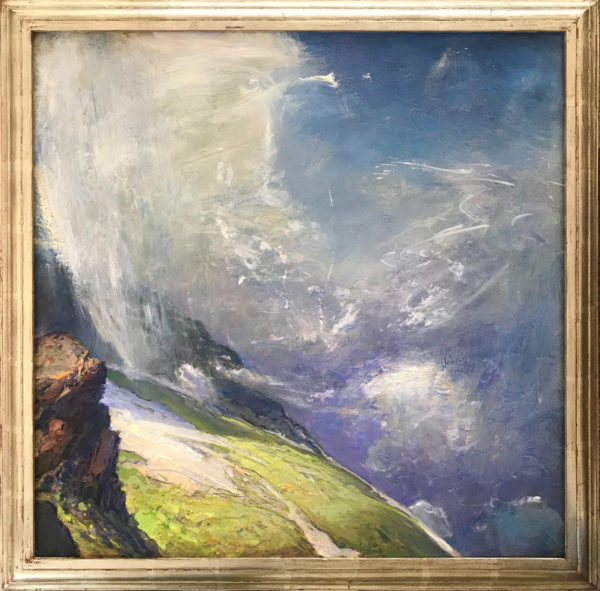 Gordon Brown, Above the Clouds. 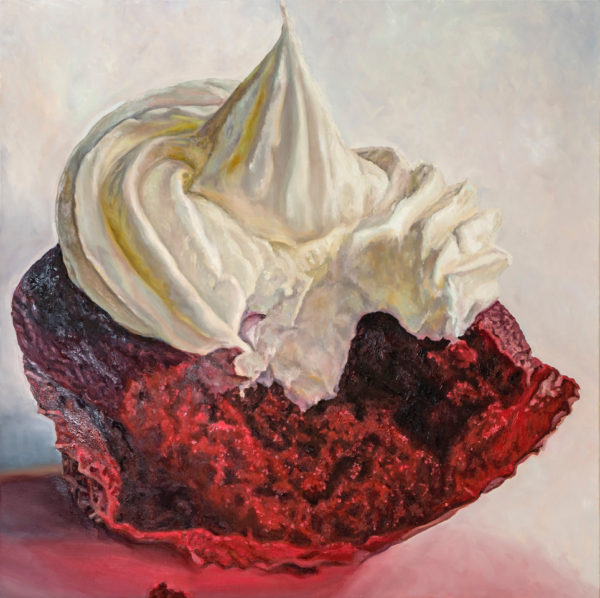 Whether she is painting people, horses, lots of them originally – and pastries now – the style Nicole Finger has developed over the years is distinctive: the artist favors a minimalist, modern palette to sculpt larger-than-life images in paint as she strives for realism (on steroids) without sacrificing the rich, textural quality of the medium as it aligns with the sensuous, sometimes luscious, attributes of the subject at hand.

One of the contemporary masters of “yummy” in paint is Wayne Thiebaud, best known for his still-lifes of edible treats and everyday objects rendered in his singular illustrative style. His most popular subject matter includes colorful cakes, slices of pie, and candy.

Like Thiebaud, like the Pop artists of the mid- to late-1950s, Finger has always been intrigued by the idea of elevating ordinary subjects through art, including most recently food. And given that our societal obsession with health, sweets and baked goods are fast becoming endangered species, Finger’s images of goodies become tributes to what could become fond memories of things past. What’s more, the thickness of icing, an impasto of lavish goo, and the countless variations on the theme of shape and color from Twinkies to lollipops offer fertile ground for painterly play in oils.

Growing up in Bethesda, Maryland, Finger was influenced by her artist mother, as well as her father’s lifelong passion with race horses, which he owned. After earning a Bachelor of Fine Art at the University of Colorado in Boulder, she worked in various artistic disciplines, including illustration.

Finger continues to draw inspiration from the spectacular beauty of the San Juan Mountains that surround her long-time home: Telluride. 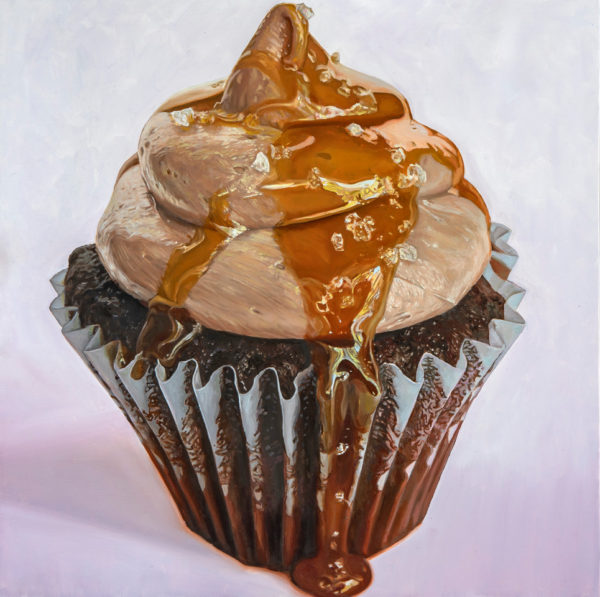 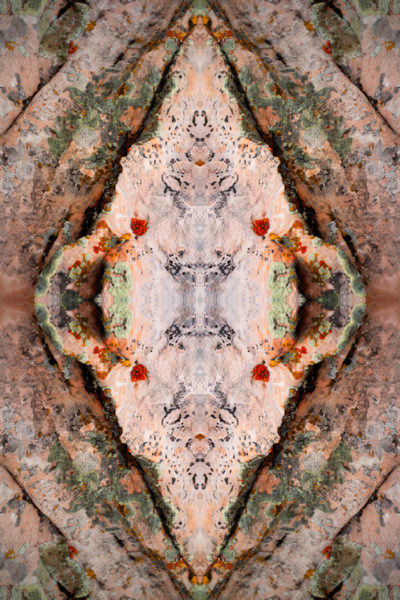 Carl Marcus is a pioneering modernist, who explores his photographic art with authenticity and an easy lyricism. His riffs on Mother Nature become jumping off points for a dialogue about the spiritual and the magical, the sublime and the romantic.

Marcus’s “Kaleidoscope” series (on display now in Local’s Loop) essentially represents a rebirth, or reenergizing, of the dramatic imagery of his past.

Marcus moved with his wife to Telluride the summer of 1978. He raised his son Caleb, also an outstanding photographer, in a cabin on Wilson Mesa. He began taking photographs on the long backpacking trips with his son.

“Our commonality may be that we attempt to communicate, beyond the content of the image, the space that may open a doorway to what we do not know,”  Marcus told Telluride Inside. And Out in an interview a few years ago.

Every year, Carl  Marcus spends at least six months alone in nature: “When I look at a rock, or a flower, or a cloud, it seems to have an immensity, a power to it that stops time.”

To create this new body of work, a project that was decades in the making, Carl Marcus went back through his own archive, scanning and digitally manipulating photographs originally created using traditional film, to create the mirrored, repeating, and compelling surreal effects.

Ruminations on color and form. 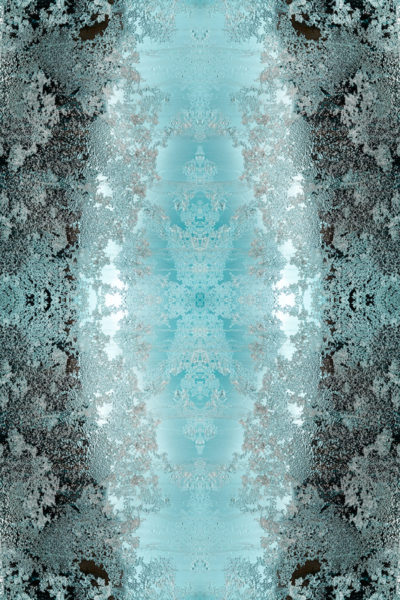 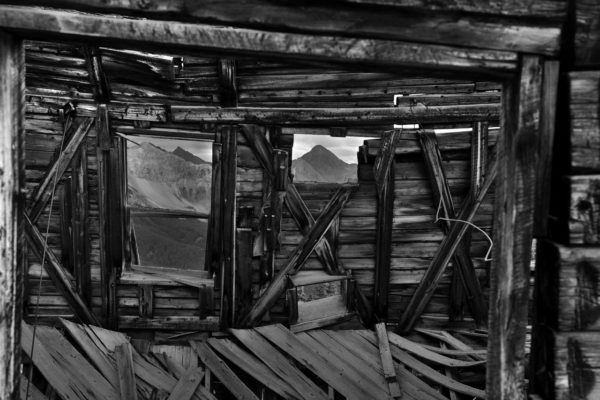 Brett Schreckengost is a filmmaker and photographer based in Ophir, a small alpine community at 9600′ in elevation near Telluride.

Schreckengost claims to have started out pretty “old-school,” learning the craft of photography in the darkroom for many years before coming into the light and embracing the digital age of image creation.

After a brief stint soul-searching and a hasty move to Los Angeles to work in the film industry on commercials and a feature film, he decided to move back to Colorado to start a small footprint production company that could deliver high production value imagery without all the burdens of typical production crews.

“My favorite subjects move fast and demand an intuitive, journalistic approach. My small production team thrives in the most challenging environments and difficult to reach locations.”

Schreckengost is an FAA remote pilot certificate holder and does a lot of work shooting locations near and far from his mountain home – his primary muse.

“I embrace all forms of image creation, but seen to lean towards short-form narrative storytelling and commercial work.” 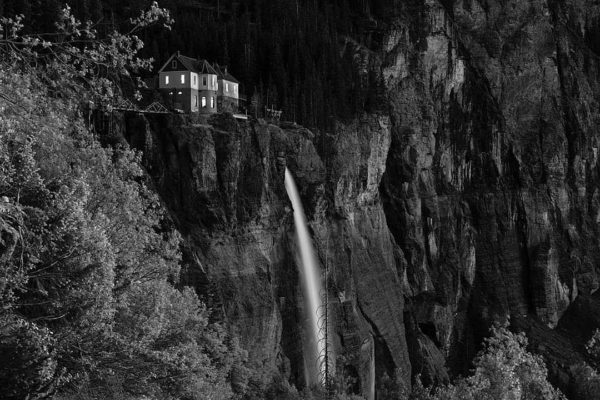 Asked by Telluride Inside… and Out about the metaphorical content of her work she produced for the Telluride Gallery show using clean white paper spray-painted paper, honeycombs and gold thread, Brittany Miller replied simply:

“Honeycombs represent the goddess Gaia, the ancestral mother of all life and thereforen of our planet, our home. It is Gaia or Mother Earth who provides us with all that we need. She is the direct representation of all ecosystems that sustain and continue life – including honeycombs. So Sacred Geometry is also part of the story. The symbolism of the hexagon, of the honeycomb, is found throughout nature and represents harmony and balance. So bottom line, if we as individuals within our collective constructs lived more simply and in harmony, nectar would flow. We would survive and thrive. Hence the minimalism of my work underlines a strong belief that we should strive to live more simply: consume less, do more. Abundance will follow.”

Miller came by her creative genes naturally: her mom is from a family of singers, song-writers, and piano-players and her “grama” had a band that toured supper clubs to play for farmers and other in Wisconsin. But it was her brother who brought her to Telluride.

“My brother, Rob Miller – some know him as Platinum Rob, rock climber extraordinaire –found Telluride following the Dead. I came to visit after college and loved the idea of walking to the ski lifts to snowboard. I have worked many jobs as so many do here in this resort community, combing the service industry bartending, waitressing, catering, flower-arranging, retail. I coached figure-skating for over 20 years. I taught a few classes at Ah Haa. I worked for the Telluride Film Fest. I co-founded the Stronghouse Studios and ran that for the first couple years or so. Worked as a mentor for One to One. Currently, I am running the framing shop for Telluride Gallery where I had the honor of being fully trained by artist Julie McNair. Oh, and selling my artwork from time to time!!”