It is Halloween, the opening act for the BIG holiday trifecta just around the corner, a night of witches, ghosts and goblins, a celebration of the id that has spread around the globe like a zombie outbreak, (yes, the living dead too), this year coupling with Covid-19 to threaten the civilized (?) world all the more – and invading writer/poet David Feela‘s haunted house of an imagination. 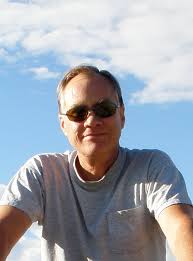 Maybe Ovid begins this day of the
unread, reciting Latin eulogies,
his waxy white skin luminous as the
moon, followed by blind Milton bemoaning
the paradise he lost, his eye sockets
sunken, his daughter thin as the wisp

of his tattered sleeve, tangled like a serpent
at his feet. Wordsworth grey as the ash
in his fireplace, stirred by his sister
with the tip of her walking stick.
A graveyard of stanzas stumbling,
unstoppable, iambic pentameters

like the shuffling of weary feet. Plath
with her gas, Hart Crane stepping off a ship’s
deck into unfathomable ocean.
So many poets only half-gone, their poems
crawling like ivy over a grimace
of tombstones crooked as yellow teeth.

David Feela, recently retired from a 27-year teaching gig, was a “Colorado Voice” for the Denver Post. He worked for over a decade as a contributing editor and columnist at Inside/Outside Southwest magazine and now contributes occasional pieces to High Country News’s “Writers on the Range”, as well as a monthly piece for the Four Corners Free Press and the Durango Telegraph. David’s first full-length book of poetry, The Home Atlas, was released in 2009 through WordTech. A book of his essays, How Delicate These Arches: Footnotes From the Four Corners (Raven’s Eye Press) is now available.