We are posting the information below at the request of Sasha Sullivan of Telluride Theatre:

“My best friend Sarah Gancher has written an incredible play that is SO pertinent with Nov 3 rounding the corner. She has been researching and writing and has gathered this totally batshit crazy (you can’t make this shit up) story in a funny, incredible show. YES! It is online… but her team is incredible, they have figured out how to make Zoom NOT boring. Watch it! Tell your friends! Support theatre makers!” 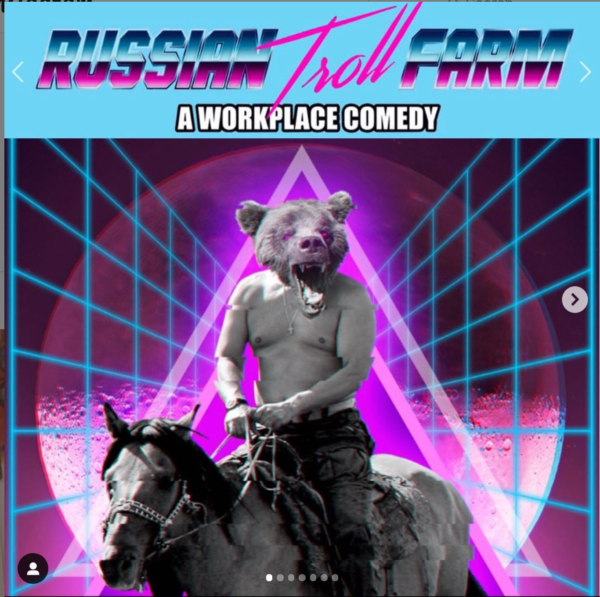 RUSSIAN TROLL FARM: A WORKPLACE COMEDY
by Sarah Gancher
Directed by Jared Mezzocchi and Elizabeth Williamson
Produced by Theaterworks Hartford and Theatre Squared in association with The Civilians

What’s the show about?

At the infamous (real-life!) Internet Research Agency internet trolls work for days at a time to influence American popular opinion, creating the illusion of consensus — or conflict. There are floors for Twitter, for Facebook, memes, fake news…

“Russian Troll Farm: A Workplace Comedy” imagines the daily lives of these workers as they invent characters, stage conflicts, and create conspiracies. What happens to your grasp on truth when your whole job is lying? How does your identity shift when you impersonate Americans for a living? Does anybody want Thai food? From Thai Palace or Thai Pavilion?

I promise that you have never seen online theater like this. It’s zoom and plain black backgrounds, yes, but no Brady Bunch squares—Jared and his team have developed zoom hacks that allow us to place actors in the same room, to layer video, to cut between cameras and views quickly, to warp and change images… it’s groundbreaking and awe-inspiring. (For those of you who saw the workshop—get ready! The full production is on a whole other level.)

I am incredibly honored that they’ve developed so many new tricks and tools to bring this script to life.

This is a new form: part theater, part live TV, part live onstage filmmaking. We’re making it up as we go along. We’d love to welcome you into the process and the conversation.

There truly is something special about watching live. Just like with live theater, there’s no net —if something goes wrong, you’ll see it, warts and all. And if something goes magically right, it’s incredible. In my experience somehow it just is different to watch live. Apart but together. Try it and let me know what you think!