The Ah Haa School for the Arts: Immerse Yourself 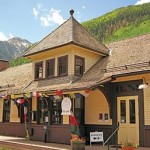 Telluride’s thriving cultural economy – and second homeowner population – is thanks in large part to two institutions, both non-profits, both with a focus experiential education with the accent on personal epiphanies and good clean fun.

The Telluride Academy was founded in 1981 in Wendy Brooks’ backyard as daycare/camp for six kids. This past summer, the Academy hosted nearly 800 young people, locals and guests, who came to town to enjoy a wide range of mostly outdoor activities.

At the Ah Haa School for the Arts the emphasis is clearly on ART, with the concept stretched like a rubber band as far as the imagination can travel.

To learn more about what’s in store for you at Ah Haa, click the “play” button and listen to the interview with the Ah Haa School’s Lauren Metzger.

Ah Haa was founded in 1990 by the visionary book artist and one-time wilderness guide Daniel Tucker, who fell in love with Telluride when he was a boy of 13. In 1989, Tucker’s mother died, leaving her son some money. He decided to use his inheritance to give back. Like his life, the school he founded would be about the triumph of personal discovery: “Ah Haa” is a close approximation of the Greek “eureka,” the utterance attributed to Archimedes upon discovering a method for determining the purity of gold.

In 2007, after 17 years housed in an old brothel in Popcorn Alley, Ah Haa needed more leg room. Having outgrown the Silver Bell building, the school inked a deal to moved into its current location, the old train depot that sits along the San Miguel River. Four years later, the sky’s the limit.

During the fall/winter season, Ah Haa offers over 60 classes for beginners and seasoned artists and over 20 classes for kids. Also on the schedule, a multitude of community events, exhibitions and free classes.

“The depth and breadth of our classes this fall and winter is truly amazing for a community this size,” said Ah Haa’s director, Rachel Loomis-Lee.  “Whether you have a few hours, a few days or a few weeks, you will find a class that nurtures your inner artist. Financial aid and work-study programs are available to any student needing assistance. As the region’s community arts center, the Ah Haa School’s classes are open to anyone who wants to join in, regardless of ability to pay.”