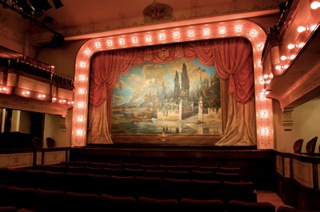 Following a screening of his “The Descendants” at the Telluride Film Festival #38, actor George Clooney quipped about one day being featured in AARP as “The Sexiest Man Still Alive.”

Come on George. You are a still callow 50-something. Well maybe not callow. Never callow, but the gap between you and “old” is as wide as the spread between model Lauren Hutton’s two front teeth. And she is old. Probably over 65. But I mean “old” in a good way. There is a difference between old and in the way and elegant, high functioning old like Hutton, Mirren, Nelson (Mandela or Willie), Buffet (Jimmy or Warren), Steinem. Or for that matter, Telluride’s two favorite old broads: The New Sheridan Hotel and the historic Sheridan Opera House.

Since her youth, Telluride’s Opera House has been described as a “jewel box,” at ease hobnobbing with the best and the brightest in politics and the performing arts. Among those who accepted her gracious gifts in Telluride’s steamy, seamy past: Sarah Bernhardt, Lillian Gish, Socialist Presidential candidate Eugene Debs and William Jennings Bryant.

When the Sheridan Opera House opened for business (as the Segerberg Opera House), a combination vaudeville and movie theatre, one fine Wednesday in July 1913, the local rag waxed rhapsodic, describing the venue as “one of the prettiest and best appointed ‘show houses’ in the state.” (And it was built with connecting floors to the lavish New Sheridan Hotel, which enabled prominent entertainers of the period to escape the paparazzi and travel directly from their rooms to the stage.)

The Opera House has screened films since 1914, one year before “Birth of a Nation,” considered to be the first feature film, was released. And it has remained the primo venue and patron haunt for the Telluride Film Festival since 1974, when Gloria Swanson was a tributee.

For better and for worse, the fortunes of the Opera House followed those of the town: boom and then bust. By the 1960s/1970s, the Opera House had gone to seed and was in need of a major overhaul. It’s a long story but let’s cut to the chase: in 1991, Keith and Sandra Carradine founded the Sheridan Arts Foundation and saved the Opera House from commercial development. Following a major facelift that took nine years to complete, (2000 – 2009), everything old is new again.

(By the by, Corddry is wonderful as a liberal do-gooder in Jennifer Garner’s new comedy “Butter,” which premiered at the Telluride Film Festival. For more on that, follow this link: https://www.tellurideinside.com/2011/09/telluride-film-festival-38-george-clooney-no-slumdog-big-smaller-films.html.)

What’s more, the lady has a big heart. The Sheridan Opera House supports the SAF Young People’s Theater (YPT), a innovative program that teaches theatre arts to young people ages 3 – 18. On the boards since 1999, SAFYPT enrolls over 250 students, largely thanks to its charismatic, dynamic director Jen Julia, who subscribes to the belief that theatre skills are life skills.

For 20 years and counting, annually the Opera House supports a Wild West Fest, a celebration of western arts, culture and customs. The week-long event offers a much needed blast of fresh mountain air to kids from the Boys & Girls Clubs of America, who come to town from inner cities to work with mentors in hands-on activities that include drama, fly-fishing, golf, songwriting, and dance.

And the Sheridan Arts Foundation/Opera House is a patron of the fine arts. Every year for the past eight, the SAF invites a group of America’s top plein air painters to town for week to, well, paint the town – and the surrounding landscape. The result of their work is displayed in a two-day public art extravaganza and fundraiser over the Fourth of July weekend. (See related story for the origins of that fabulous event, shades of Norman Rockwell.)

Telluride and Mountain Village have two other major venues, The Michael D. Palm Theatre (in town and attached to the Middle School/High School) and the Telluride Conference Center (Mountain Village). Both are differently wonderful from the historic Opera House, but for sure, neither has ghosts. You heard it here…