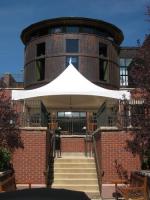 Telluride’s five-star Wilkinson Public Library is what Telluride itself is all about: Small in size only. Big WOW! factor. Like the proverbial Little Engine, it can. It does.

In 2013, for the sixth time in a row (and running), the Library Journal Index of Public Library Services, a public library rating system, designated Telluride’s Library a five-star institution.  The designation is based on patron use per capita in four service categories: library visits, circulation, program attendance, and public Internet use. Wilkinson Public Library ranked fifth in the nation among public libraries with annual budgets of $1 ñ 5 million. Wilkinson is the the fifth busiest institution of its kind in the nation in its budget category, which includes 1,300 similar libraries.

For a synopsis of Telluride’s library and community center, check out Ryan Wilson’s video.


Telluride’s public library debuted with the arrival of founders Larry and Betty Wilkinson. In 1965, a bookmobile came into town once a week. That was it for book lovers, so Larry and Betty met with the town’s Fire Department to request space to house a bricks-and-mortar library in the Quonset Hut. Once the hut was ready to house books, however, its hours of operation were very limited: three days a week, three or four hours a day. The library’s budget consisted of donations to pay for the coal-fired heat needed to keep the place warm. Its book collection also came from donations from local citizens and from the discarded titles from other libraries. But it was a start.

In 1974, the Wilkinsons decided to up the ante, presenting a petition to the San Miguel County Commissioners to put the library on the ballot signed by 100 taxpayers. With voter approval, the first board was appointed, with Betty Wilkinson hired to be its first director. Eventually, inevitably, the library outgrew the hut. This time, Larry went before Town Council for permission to renovate the old stone jail, ultimately made possible with a grant from the National Park Service. To get the job done, Betty and Larry rolled up their sleeves, hauling 20 tons of rock in the back of their van, three or four rocks at a time. The new and improved library was dedicated at its new site in 1976.

A 1984 addition sufficed only for awhile, but the present-day 20,000 square foot library nearly wasn’t built. After a recount, the 1997 referendum passed by a margin of only two votes. The new building opened August 2000.

The Wilkinson Public Library is so named to honor the founders who nurtured the library through its inception and expanding vision. Larry served on the Library Board through the building of the current space.

In addition to housing a sizable selection of books, videos, CDs, MP3 files and more, the Wilkinson Public Library hosts events and presentations year-round. Programs include Books and Cooks the first Tuesday of the month, monthly film showings in collaboration with the Telluride Film Festival, Rocky Mountain PBS, and the Mountainfilm in Telluride. From time to time, musical acts entertain on the decks and in the Program Room. Free fitness classes include Zumba, yoga, and Pilates. Children’s story time every Monday, Wednesday, Thursday (bi-lingual) and Friday rocks.  See an up-to-date listing of regular and special events on the library’s Facebook Page.

“We just returned from a trip to Telluride, CO with our 4 and 6 year old. There are sooo many kid friendly activities. Highly recommended as a kid and adult friendly vacation spot. The Telluride public library has the coolest kid’s section I have ever seen!,” raved Melissa Ryan O’Neill. “There are gondola rides, streams to fish in, rivers to float down, amazing walking trails, waterfalls, 4×4 Jeep tours….”

An unstoppable train like the Wilkinson needs a conductor. Enter Barb Brattin, the award-winning current Library Director, an out-of-the box thinker in our little box canyon. In addition to her administrative and oversight responsibilities, including local, regional, statewide and national commitments, Barb enjoys writing fiction. She publishes her work on Amazon Kindle under the pseudonym Nikki Duvall.

Stop by Wilkison Public Library anytime between 10 and 8 Monday through Thursday, 10 and 6 Friday and Saturday, and 10 and 5 on Sunday to take advantage of the small town library with more going on inside its walls than you’d ever expect.